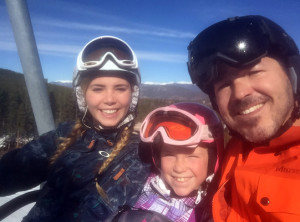 Dave Mann has served in several different leadership roles throughout his life and loves the role of servant leader the most.

Dave is married to Jodi and has two daughters, Lauren (18) and Ellie (11). He and his family lived their entire married and all of the kids’ lives in the same home in Carlsbad, CA, until early 2014 when they relocated to Castle Pines, CO. They owned and operated Patriot Roofing and Solar from 1995 until they sold the business in early 2014. Now, Dave works as a General Contractor in Colorado and absolutely loves his business and life here. He and his family ski together often and have become much more bonded and healthy since their move (a common side effect of living in Colorado!).

Dave played college football and baseball and started his first business at 23. He has tried to work for someone else on two occasions and wanted to crawl out of his skin both times. With a recent focus on transformational leadership, Dave strives for and loves learning about leadership.

He considers his wife, Jodi, to be the center of their family, someone who always keeps their lives exciting and fun. Lauren is a freshman at CU Boulder and Ellie is in sixth grade at Aspen Academy.